A few years ago, when I was President of the Society for Music Perception and Cognition, one of my duties was to give a Presidential Address at the biennial meeting. Traditionally, the president gives some overview of the Society’s business, advertising upcoming initiatives and the like. And then is given leave to discuss any topic she or he thinks is important to the field.  My topic was the relative absence of older adult participants in papers published in our field.  That conference was in 2013 and I don’t think much has changed, despite my glitzy slides and dramatic delivery.  So here I want to go over some of the points I made then and use this forum as a call to be more age-inclusive in our research area.

First, let me present some data to back up my claim that older adults are not very present in our research literature.  I recently performed the following journal searches.  Journals of Gerontology B (which specializes in cognitive and perceptual studies) has published 2523 articles in its history.  Although no search strategy is perfect, I used the term ‘music’ as an intersecting keyword…and came up with exactly one article, from 1995.  Similarly, I examined the APA journal Psychology and Aging. Again I looked the journal’s history of 2514 articles, and also used intersecting keyword term ‘music’.  That yielded 12 articles (4 of them mine). How about the reverse search strategy? I examined the publishing history of Music Perception, and intersected that with ‘aging’ as a keyword and came up with a grand total of 5 articles with only 2 of those 5 about healthy aging (1 of them mine).

By any count, that is under-representation, considering that older adults are not a small proportion of the population, particularly so in developed countries, and the trend is continually increasing as people live longer and family sizes shrink. According to the UK Office of National Statistics, the proportion of people 65 and older the UK in 1996 was .15, rising to.17 in 2010, and projected to be .23 by 2035. People 85 and older are projected to constitute .05 of the UK population in 2035. US Census Bureau estimates that by 2060, the number of people 65+ in the US will nearly double from 52 million in 2018 to 95 million in 2060.

Well, perhaps one could argue that studying the musical lives of seniors is not so important because older adults are not musically engaged. I’m sure anyone reading this blog can come up with many many examples of older adults involved in music either professionally (Pablo Casals was conducting in the last year of his life, at age 97), avocationally (think of the age distribution of many a community choir or band) or as devotees (think of the age distribution at a concert featuring genres such as classical, jazz, or classic rock).  See below for two graphs of participation rates in singing, and playing a musical instrument in the US (courtesy of National Endowment for the Arts); rates in age groups of 55 to 75 are about the same as 25 to 55 (the rates drop in the oldest cohort, although we may assume physical and cognitive limitations would be a factor). 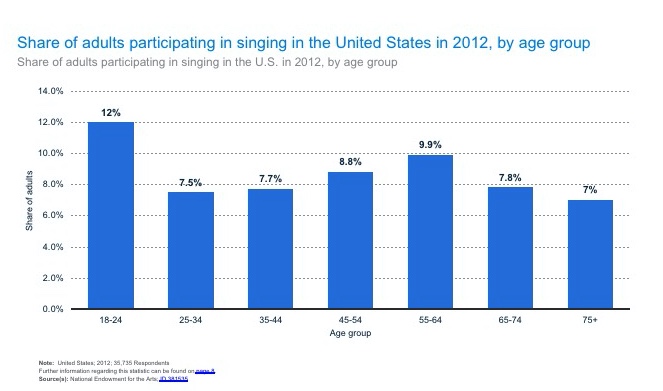 So we have a mismatch between representation of seniors in our studies, and representation of seniors in the population generally, and in music participation.  Although we do not know all the reasons this might occur (it is hard to make conclusions from the absence of evidence), it is of course convenient to study young adults in many situations, such as a lab situated in a typical university.  It is also true, albeit somewhat circular reasoning, that we know a lot more about other aspects of young adult functioning, such as cognitive, perceptual, social, emotional, and motor processes, that we use as background and baseline to situate studies using music.

Going above statistical considerations, I’d like to argue that extending the age range in our studies to those 60 and older is important on substantive grounds. Older adults provide an interesting, perhaps paradoxical, set of contrasts to younger adults. On the one hand, we know there are some behavioural and biological downturns in older age.  One generalisation is that the speed of neural transmission is slower with age (on average) which has consequences for efficiency of functions such as working memory span, divided attention, and formation of new memories, as well as the obvious effect of slower motor reactions.  On the other hand, the older we get, the more experience we accrue.  This could take the form of explicit learning and training (for instance, the considerable additional years of formal study and performing an older musician might have over a conservatoire student) but also the knowledge gained by implicit exposure via listening to music on media, concerts, and in participatory settings like religious services.  Older nonmusicians have heard much more music in these settings than their younger counterparts and researchers miss the opportunity to examine correlates of such exposure if we limit our population to younger listeners.  The relative tradeoffs of these different kinds of ‘advantages’ can be very informative in clarifying many areas of music psychology.

As one example, I’ll cite a study I did some years ago (Halpern, Kwak, Bartlett, & Dowling, 1996). We recruited older and younger musicians and nonmusicians, and gave them a standard probe tone task: after hearing a triad, one of the 12 chromatic notes of the scale was played, and listeners had to rate goodness of fit of the probe tone to the triad context. Internalisation of the tonal hierarchy is reflected in a ratings profile wherein the tonic is rated as the best fit, followed by the other triad notes, the other diatonic notes, and lastly the nondiatonic notes.  As is typically found, musicians had a more differentiated profile than nonmusicians.

Interestingly, older adults had as differentiated a profile as younger listeners, and in one sub-analysis, a more differentiated profile.  But this age robustness was only evident when string tones, and particularly Shepard tones (which minimise cues to pitch height) were used. If the stimuli were sine waves, where pitch height is very salient, older adults were sometimes ‘captured’ by that dimension and rated probe tones as more similar to the context the closer in frequency it was to the tonic. This might reflect a lesser ability to inhibit an irrelevant dimension, an executive function that is known to be sensitive to age.  But another interesting observation, which I’ve replicated many times (as have others, in different domains) was that age and musical background did not interact: the advantage of musicians over nonmusicians was the same in older and younger people. In other words, the cognitive and perceptual advantages conferred by younger age seem to stem from different resource pools (and possibly neurobiological substrates) than those associated with training/propensity.

Another example of where the age variable was valuable comes from a study on memory for melodies. Learning a list of new melodies for even immediate recognition is quite difficult, in comparison to learning a list of words, faces, or objects.  In one study (Deffler & Halpern, 2011), we gave older and younger listeners (unselected for musical background) a list of novel tunes, and paired each with a baseline category label (Patriotic), a label plus a neutral fact (‘Played at military exercises’) or an emotional fact (‘Played at military funerals’).  We thought that context might help memory, but that did not occur with the younger listeners.  However, the older adults showed an interesting pattern: their recognition memory for the tunes declined in the neutral fact condition, but recovered to baseline when the fact was emotional.  We interpreted this to mean that the different age groups had employed qualitatively different memory strategies: whereas the neutral fact seemed serve as a distracting condition for the older participants (similar to the probe tone study), the emotional information served as scaffolding at encoding, presumably providing a richer context for retrieval. The young adults were obviously not relying on this kind of encoding strategy.

So this kind of investigation can inform us of how lifespan experience, career choice, and biological aging processes may interact in music processing (and other domains).  And such conclusions may usefully inform many other fields. For instance, music and other arts therapists could develop more targeted activities that older adults would profit from. I haven’t yet mentioned adults with cognitive impairments, but it is obvious that a more thorough understanding of normative functioning will be very helpful to understand impaired functioning when it comes to the arts.  Another field that could benefit from this research is music education. Although we are accustomed to thinking of only children and young adults taking music lessons, there is increasing interest in encouraging people of all ages to continue, or to take up, training in music or participate in groups such as community choirs. Educators need to know how to tailor their approaches for older adults.  Finally, the field of marketing needs to understand how to reach an increasingly aging population. Music is often used in adverts for both for-profit products and public services, to convey both the content and affect. It pays (!) to understand how the audience is hearing the message.

This site uses Akismet to reduce spam. Learn how your comment data is processed.